Some photos of Daryl boy from last month. 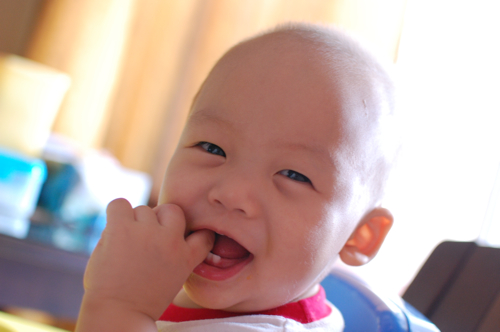 A cute T-Shirt. He and Caleb are so blessed to have so many clothes handed down from their cousins. 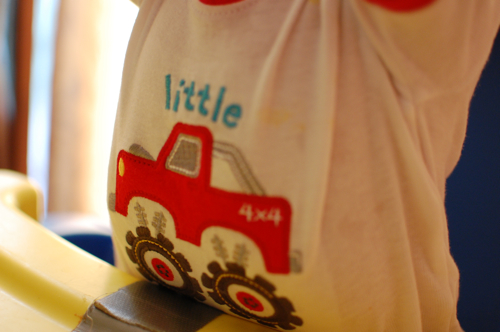 From this angle you can see he’s quite grown up. Almost out of the baby stage and entering his toddler years.

He won’t stop eating. Nothing can stop him, not even if he only has four teeth.

Daryl boy laughing. Probably after doing something naughty like throwing all his food, plates and water bottle on the floor. 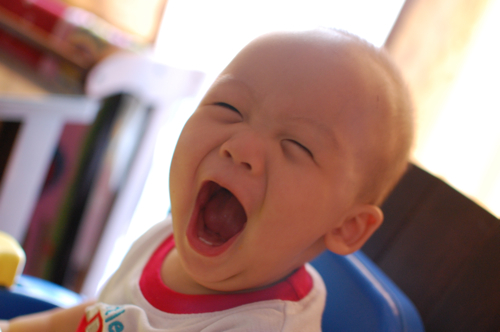 I know I know, I always take over-exposed photos. But this is one of the few places in my home with a) sufficient light and b) a place to distract them to stop them moving around.

When we took these photos, he just had a haircut so he looks quite bald. Poey Chin says in this photo he looks like me. 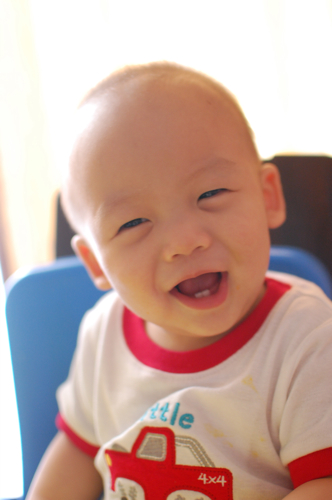 Daryl looks like he was deep in thought. Probably planning his next meal. 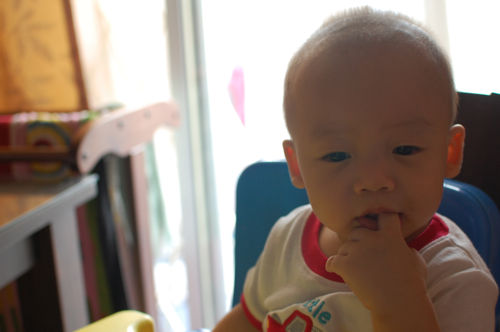 Some updates on his development. His legs are strong enough for him to walk, and he can walk quite far if we hold his hand. But he is not used to it so when we let go he just resumes crawling.

He is starting to communicate by pointing, nodding and shaking his head. He can make gestures to say he is scared. He can follow some simple actions when dancing. He can play some toys correctly.

He can point to his nose, ears, eyes and tummy.

He loves playing with phones and pretends to call me at work. My dad likes taking him for walks and he loves it.

He can say “chee chut” (lizard) and “dark dark”. I have taught him to bark like a puppy, but he says it like “rar rar”.

His hair is really starting to get thicker and longer, maybe in the next round of photos you can see him with more hair.

One major development is he finally stopped sleeping in his baby crib (which is now ready for baby Caleb). One day he actually climbed out of the crib to our queen sized bed (next to it) and that was the last time he could sleep in there.

Finally I just want to mention that in the past few nights he’s been waking up in the middle of the night again. Sigh. Don’t know if he’s insecure about baby Caleb or it’s just a phase all babies go through, but I think its the latter.

P/S: Shortly after I uploaded these photos to my blog, my hard disk died taking all our documents and photos from the past 1 or 2 years with it. Sigh… all of Daryl’s photos gone.