Recently Poey Chin and I observed the 5th anniversary of our wedding engagement.

I say observed because we did not celebrate or do anything special other than giving each other a hug and a kiss.

Then we went back to observing the kids.

I don’t know. I’m really bad at this. The first year we probably celebrated this special date (but honestly I can’t recall what we did). Now it’s the fifth year and I didn’t even buy flowers.

Before Poey Chin thinks about asking me to sleep on the sofa, let me distract her with this photo! 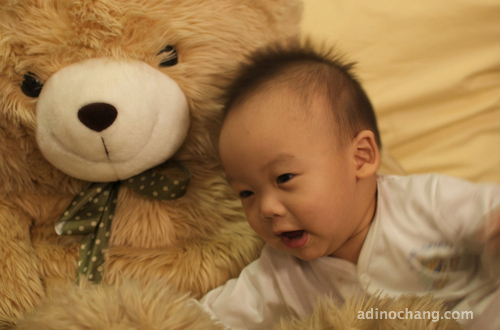 I gave this bear to Poey Chin when I proposed.

One day we were at Lovely Lace and she said this bear was soooo cute.

A few days later I sneaked to the Lovely Lace store at the mall (which sounds like a lingerie shop but it’s NOT!!).

I walked in, approached the sales assistant and pointed at the bear, “I want that bear”.

She looked rather surprised and proceeded to take the longest time to pack the bear.

In the mean time, I was getting all sorts of allergies from the overpowering scents in the store.

In the end she rolled the bear into a ball and stuffed it in two large plastic bags, not managing to fit everything in the bag.

I walked out of the store holding this giant, red plastic bag. Everyone could see the bear’s hand sticking out.

I felt like a serial killer. Then I had to hide it in my car boot, hoping Poey Chin would not see it.

My plan was to use the bear as a distraction. I showed Poey Chin the bear, and she was so happy. All her attention was on the bear.

I went to get the flowers and engagement ring and knelt down behind her back, waiting for her to turn around.

Nowadays it has become Daryl’s “bear bear”. He drags it around by the head because it’s so big, and the head is starting to tear loose from the body.

I just want to end this blog post by saying how wonderful these years have been.

I had given up on love, deciding to live forever alone until Poey Chin came along.

She changed my life, made it better beyond my wildest expectations.

And it all started from the first words I heard from her lips, “I’m missing Klang seafood to meet your band…”

But that’s a story for another anniversary!

P/S: Poey Chin would never ask me to sleep on the sofa. I would enjoy that too much, watching TV till the late hours, and the luxury of sleeping without any of the kids disturbing me.

P/P/S: I want to highlight another anniversary. This blog is almost 5 years old! You can jump back and start reading my very first blog post about our engagement.