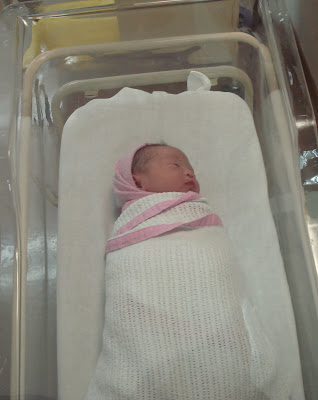 I just realised that I completely forgot to write about the events that took place when baby Rachel was born.

Read this post for the entire story of Rachel’s birth. I think those of you who are not parents will find this interesting.

First, read the background story, before we made our way to the hospital.

Well, the doctor examined Poey Chin and concluded that an emergency c-section was necessary. Baby’s head was just too big to pass through Poey Chin’s pelvic cavity (this also means future babies will probably need c-sections too).

Immediately we were brought to a delivery ward, where Poey Chin changed into a hospital gown and they prepped her for surgery.

I was given a few forms to fill and then I went downstairs to handle the admission process for my wife. In the mean time, phone calls and SMS were being sent out like crazy to inform all relevant parties that baby was on the way.

I came back upstairs and before we could settle down they wheeled Poey Chin up to the sixth floor (I think), where the operation theatres were located.

I said goodbye to her as she was wheeled in to the OT area. I sat down at a bench outside and brought out my book, preparing to wait.

A nurse came out and asked if I wanted to go in to the surgery with her. I was caught unprepared. We were told that I couldn’t go in. I asked Poey Chin if she needed me with her… she said no. So I declined and went outside again.

A few minutes later, I changed my mind. I didn’t want to miss seeing my daughter born, and I wanted to be there for my darling wife.

I pressed the intercom and asked to go in with my wife. I was led to a changing room to put on surgical scrubs.

After waiting for almost 10 minutes, one of the assistants brought me in to the operation theatre.

Poey Chin looked really scared, and she was shivering from the cold. Doctor had already started on the surgery. I sat down beside her, near her face.

There was a cloth obscuring Poey Chin’s view from what the doctor was doing. I could have looked inside if I stood up, but I didn’t want to.

I could only give her reassurance that everything was okay. I helped her to wipe tears from her eyes, and held her face with my hands. I told her it was okay to shiver, it was a natural body reaction and not to fear.

Now as I think back, I realize that my experience being in the emergency ward with my dad has helped me stay calm in spite of all the things going on.

After about twenty minutes, doctor was preparing to pull baby out of Poey Chin’s womb. He used some forceps to bring baby Rachel into position, and he just pulled baby out.

Baby Rachel looked all purple and she was covered in a bit of blood.The doctor passed her to a midwife who was waiting with towels.

I looked at Poey Chin and told her that baby was out. I said, “Baby is out already… she has long legs”.

The midwife brought Rachel to a corner and put a tube inside her throat to suck out the mucus.

Baby cried a very soft cry… sounding very irritated. Then her cry got louder and louder.

I looked at Poey Chin again, and she was crying after she heard baby’s voice. The midwife spent a few minutes cleaning, weighing and tagging baby. She brought baby for us to see. She confirmed that we had a girl.

I was busy making sure that baby was tagged properly. By now baby was more pink. We weren’t given a chance to hold baby.

The midwife put baby in a heated incubator and brought baby Rachel down to the nursery. I said goodbye to Poey Chin and followed baby down.

I waited outside the nursery for a good twenty minutes as they cleaned baby Rachel up. I called my parents to come as I waited.

Finally, they opened the nursery curtains and wheeled baby Rachel to the glass window.

Baby Rachel opened her eyes and looked at the ceiling lights. She glanced at me, but I don’t think she knew who I was.

I snapped some photos, then stared at her for a while… burning her looks and features into my brain permanently.

I then went to wait for Poey Chin to come down from the OT. By this time, I was quite anxious that she was okay. I waited almost half an hour. At that time, I didn’t know she was still in the OT under observation, to make sure she was okay before transferring her to a ward.

My parents arrived and they went to see baby at the nursery.

Poey Chin finally came down to her ward around 12:30. I was relieved to see she was fine.

My colleagues came over to see us, and the nurses wheeled baby in the ward. For the first time, I touched baby Rachel.

It was such an amazing moment to have baby in our arms. Finally, what we had been expecting in the past seven months has become a reality.

There was a sense of relief that there were no complications.

I felt a warm feeling that I now had a family of my own. We weren’t just a couple, but a family now.

But I would admit that immediately I started to stress about a lot of things, like feeding and changing baby. She would cry so loud that I panicked.

How silly I was.

I love Poey Chin so much more, for all she had to go through. She is really strong, tough and brave. What a wonderful woman I married.