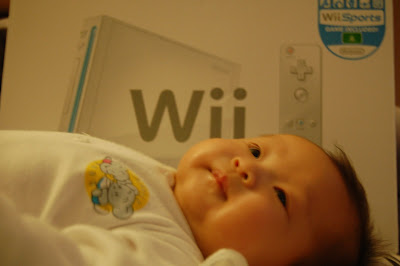 Those of you who are in my contacts list in Facebook will know this already (so what are you waiting for? Quickly add me in Facebook and join my Mob Wars mob!)

My sister actually got the Wii from Melbourne, and my dad brought it back when he came back from visiting her last week.

In case you don’t know what a Nintendo Wii is, it’s the latest Nintendo console with a very unique control system. The Wii remote can be used to point at your TV screen, and it can detect motion and acceleration.

I’ve been playing the Wii Sports that came bundled with the console, and so far I quite enjoy the Boxing game. I actually have to do boxing motions with my fists and my on-screen Mii will do the same! It’s really really fun!

I also like playing Tennis, where I can practice my forehand and backhand swings. It can even detect top-spin motion! Every time I play Tennis I try to imitate Ivanovic Federer.

Baby watches me play and she’s very amused. She looks at me with round eyes and has a bemused smile. Sometimes she laughs at me when I get particularly active doing my Nintendo Wii moves.

I have to tell you, after playing for half an hour it really feels like a mini-workout. My arms get tired and I’m sweaty all over. I even need to take a break for water!

I’m a little embarrassed to admit that I’ve got some sort of sprain in my right shoulder after trying to hit home runs in the baseball game.

My next target is to try and find a shop to modify my Wii so I can play pirated backup disk games.

I am also looking for a good deal on the Wii Fit balance board.

Anyone know of any good shops in PJ area?