I don’t know if anyone is interested to read about our love story. How did we meet? How did we end up together? What was it that made us decide to marry each other?

Way back in 2005, my friends and I started a Christian band. We felt that we needed another instrument to make us sound fuller and to give us more options. Leon introduced us to a girl called Poey Chin.

Now, Poey Chin has always been in the picture. I do hear of her name a lot but I’ve never had the chance to meet her before. She was Leon’s classmate from Sedaya. It seems that the few chances we could have met, we missed each other due to various circumstances.

And so Poey Chin joined our band, and the major event for that year was CWC (Children’s Workers Conference) in Penang. After months of rehearsals we were finally ready and made our way to Penang. 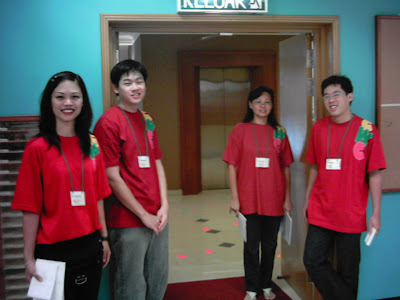 The ushers during the first day of the conference.

At this stage, we were still getting to know each other. I was (and still am) very shy. We were there not only to lead worship but had to work as helpers too.

I was assigned to Jireh room. I walk in and find that I have been partnered with Poey Chin to handle the sound system. 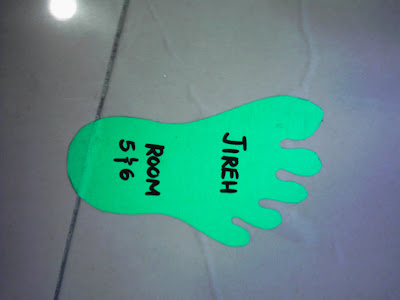 During the course of our duties we started talking. I was very shy and Poey Chin did most of the talking.

We talked about our families. I showed her pictures of Sushi my girl-bait Shih Tzu. Turns out that she doesn’t really like dogs. Oh well. She told me about her nephew Keith and her big brothers. 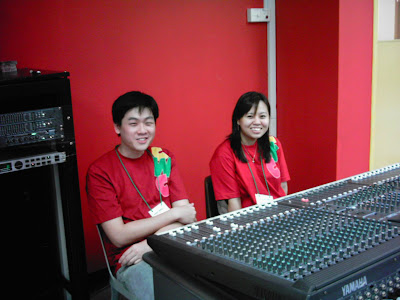 This was THE spot. I very good boy, didn’t sit too near ok?

We talked so much that for several times we didn’t hear the speakers asking us to lower the volume or raise the volume or play some music. 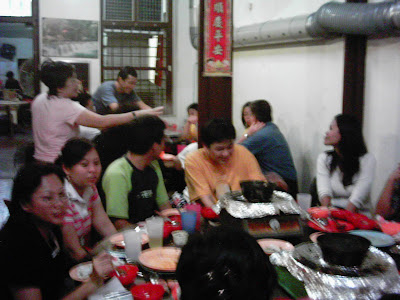 On the last day of the conference we went out to have Korean BBQ. Sigh, Leon was so blur blur and took the seat next to Poey Chin. I remember Poey Chin helped to fry some meat. I was watching and evaluating her cooking skills (she’s a great cook).

After the conference it took me a few weeks to work up the courage to SMS her. Apparently by this time several of her friends already know something before I did.

After that we called each other. I made an appointment to visit her music school to look around, and after that go for a meal together.

Of course, at that time we were careful not to go any further because we wanted to be sure we know each other better first.

We told each other everything about our past. Everything that we didn’t want to wait for each other to find out ten years down the road. We started with transparency and accountability. It was hard to talk about some things, but it was better to accept and move on, or not accept and end it right there.

The rest is history. We found that our values aligned, and our pasts have molded us to become the right person for the other.

I can say that I have found the perfect woman for me. Now those beautiful eyes of hers have been cloned to our baby Rachel, and I’m doubly blessed.

P/S: At that stage of my life I wasn’t actively looking to find a partner, but my heart does cry out in loneliness. One of my friends is going through the same feelings of loneliness and I do believe that God hears you like he heard me.