When I was shopping during the last holiday weekend I decided to give yoghurt a try.

You may be surprised to see a person who has never had yoghurt before.Well I have tried a bit of yoghurt before (when it first became available so many years ago) but I didn’t like it.

I don’t drink milk. I’m not lactose intolerant, because I don’t get any bad reactions after taking milk. I just feel like throwing up if I get too much of a milky taste in my mouth.

Sometimes when I’m washing baby’s milk bottles I feel like throwing up. I’m so afraid of baby Rachel throwing up on me that I face her the other way when I burp her.

Strangely I’m okay with milk in my coffee, tea or other drinks. I’m even okay with dairy products like butter, cream and even ice kacang. I don’t mind eating condensed milk in it’s undiluted form.

Even then I could barely keep it down with some coffee and toast.

So I got myself a packet of Dutch Lady yoghurt at RM1.79. You can see the delicious breakfast Poey Chin prepared for me ‘just in case’. I like the little folding spoon that came with it. 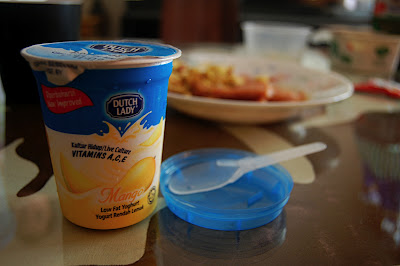 After I opened the lid, it smelled strange, like a vat of moldy milk. It looked like dogs vomit. 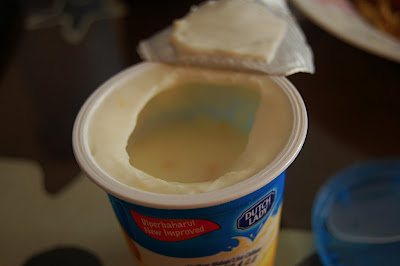 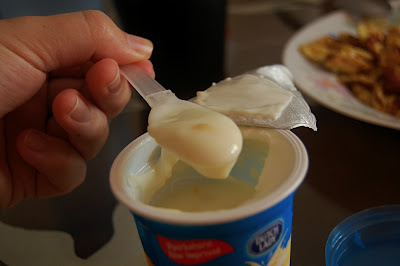 I put it in my mouth. 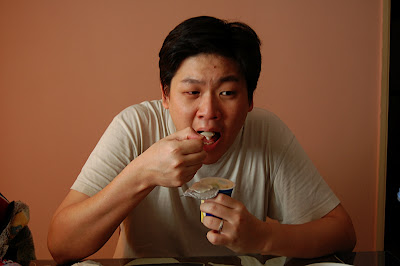 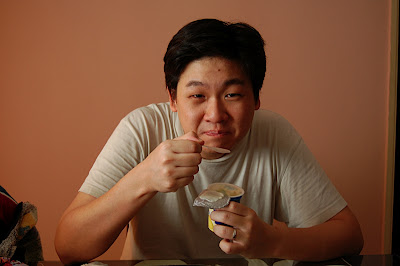 And waited some more (enjoying the delectable mango bits)… 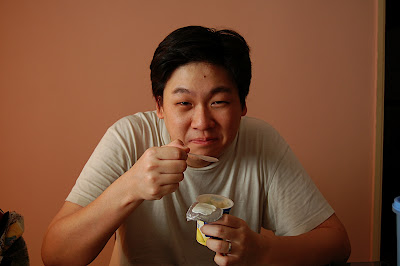 And I liked it! Now that I look closely at the photo, it does seem like someone is pointing a gun to my head. But trust me, Dutch Lady yoghurt (and I assume other brands of yoghurt) does taste quite nice.

However, I could only take half of it (the other half is still in my fridge!).

After a while my melted ice cream mantra didn’t work any more. The milky taste became too overpowering and I gave up.

Would I get another one? Sure, but I think I’d have to share with someone. I just don’t think I will be able to finish that huge carton of yoghurt by myself. It’s like a Fear Factor challenge for me!

My suggestion for yoghurt manufacturers is to include something crunchier (like chocolate chips or chopped almond nuts) so that the texture becomes a bit more bearable.

How about you? Do you like yoghurt? Which is your favourite flavour?

P/S: Sorry to scare you with my ‘fresh out of bed’ look